We have now increased the selection...

We offer a complete range of...

A choice of Standard or Comprehensive...

We are pleased to report that we have...

Welcome To Your Course

We have a busy week with...
Ifast Fire and Safety Training > News > Charity Kick-Scooter Event Recognition 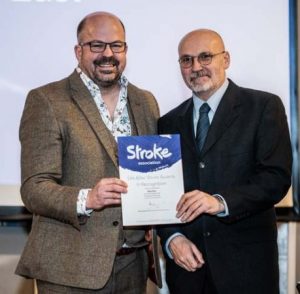 We are delighted to announce that our very own member of staff Alan Parr (pictured on the right) has received a recognition certificate from The Stroke Association after his mammoth charity event last year.

Alan decided to embark on a charity Kick-Scooter event on his own, travelling from his parents home in Leigh in Lancashire to Lee-On-Solent in the South.

Alan chose The Stroke Association as his chosen charity as both his parents and one of his work colleagues have been affected by a stroke.

Alan completed the journey which was self funded, in 5 days and completed 284.64 miles.  His Kick-Scooter was equipped with the basics for this physically demanding journey.  Alan even carried a tent for over his overnight stops to keep his expenditure to a minimum.  His journey wasn't an easy task.  Alan had to endure torrential rain and even suffered three punctures in one day.

He raised an outstanding £1371.25 for this worthy cause.  If you would like to donate to The Stroke Association via Alan's fund raising page please click on the link.  Just Giving